I don’t know about you, but I’m absolutely in love with USB flash drives (thumb drives, jump drives, whatever you want to call them). I’ve been using them since they first became available. The oldest one I still own is a 16MB drive that I bought for $50 in 2001. The one I currently use is 16GB. That’s three orders of magnitude in eight years — remarkable!

The only problem I have with USB flash drives is when I mistakenly leave them in my pants pockets, and subsequently put the pants into the laundry basket. The flash drive will then suffer the grisly fate of being spun around the washing machine soaked in soapy water, and will most likely never work again. This made me think about possible methods of somehow sealing the flash drive to make it more resistant to the elements, or to physical impact. 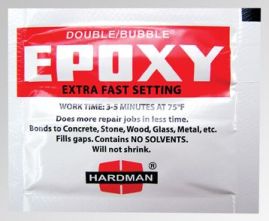 At the office where I work, I had found a supply of epoxy that the hardware engineers use for various purposes. This epoxy comes in little packets, with each packet composed of two pouches containing different substances that, when mixed together, produce the hardening epoxy. I knew about the supply of epoxy for a while, but I hadn’t made the connection between the epoxy and the flash drives until one day, in a moment of total enlightenment, I held up my flash drive in one hand, and an epoxy packet in the other, and began to laugh uncontrollably.

I wasn’t sure yet how well the epoxy would work, but everything about the epoxy seemed perfect, including the quantity, and what was written on the packet, which is:

That same day, I took an ordinary USB flash drive, removed the plastic case so that the PC board was completely exposed, mixed up some epoxy, and poured it onto both sides of the board, making sure that all the electronic components were fully covered, and only the USB connector exposed. After about 5 minutes the epoxy hardened, and the result was even better than I hoped. The flash drive became indestructible!

Wanting to buy some of these packets for myself, I searched for a distributor of this stuff online. The brand of the epoxy is Hardman (aptly named!), and the first result is Ellsworth Adhesives, which sells a box of 100 packets for about $120. After looking a little harder, it seems that you can get the same box for a lot cheaper, such as from HMC Electronics which sells it for $80, which is 80 cents per packet — a great deal. Plus, the box includes popsicle sticks for easy mixing and spreading.

After I received the box, I encased two more flash drives in epoxy, with the same great results. The epoxy becomes rock-solid and impenetrable! Since then, I’ve been epoxying pretty much everything that makes logical sense: more flash drives, card readers, MP3 players, etc.

The benefits of epoxying a USB flash drive (or any other small USB device) include:

Here are some brief instructions for encasing your own USB flash drive in epoxy:

Safety first: Make sure you do this in a well-ventilated room, and don’t get any epoxy on your skin or in your eyes. And of course, make sure any data that’s currently on your flash drive is backed up, in case anything “unexpected” happens.

So, then, aside from USB flash drives, what kind of things are you planning to (or have already) encase in epoxy?

(Thanks to Lifehacker for picking up this story)