Over the past few centuries, numerous theories have arisen about “hidden messages” supposedly inscribed in the Bible (and other holy texts). These messages can only be revealed, for example, by reading every other letter of the text, or every seventh letter, and so on. Many believe that these messages have prophetic value, and even that the “true” word of God is somehow tangled within these codes.

The irony here is quite thick, since it is the Bible itself that is supposed to be the “word of God,” not some arbitrary partition of it. It’s as if the Bible Code enthusiasts have read the Bible and found nothing but absurdity, so they began to read not only between the lines, but between the letters!

We tried to read the Bible the “ordinary” way, but it made no sense. That must mean that we’re just not skipping the right number of letters!

In any case, the “messages” that are discovered are very brief — single words, or a perhaps a short phrase, for example, “JFK SHOT,” or “PAUL IS DEAD.” Obviously, these can easily be interpreted as “prophetic” statements. However, the irony grows even thicker because, like all Biblical prophecies, they are always discovered a little after the fact (vaticinium ex eventu).

In about an hour of programming time, I developed a small Windows application that performs this exact function — search for hidden codes in the text of the Bible. I then obtained the King James translation from Gutenberg, and eliminated all whitespace, punctuation, and verse numbers. Finally, I began my investigation. What I found was not necessarily surprising, but fascinating nonetheless. The following is just a short list of all the “revealing” statements I found in my search. Be prepared, and keep in mind that these are actual blocks of text from the Bible — you can even read through them to be sure.

At long last, I’ve recovered the source code for my Bible Code Finder application! The program takes a plain text file (preferably a large one), and allows you to scan it for occurrences of words with equidistant letter spacing.

To download the full text of the Bible (or a great number of other texts), visit Project Gutenberg.

It works like this: start the program and open the text file that you want to search (the program automatically strips punctuation and whitespace). Then enter up to seven words to look for, and click the Start button! The program will find the first occurrence of all words within a certain range, unless you select “Find All” instead of “Find One.” The result(s) will be shown in the Results tab.

The “Frame Size” parameter is the range (in letters) within which all words must be found. “Min Delta” and “Max Delta” are the minimum and maximum letter spacing of words to search.

Obviously, longer words will take longer to search for. Generally it’s highly improbable to find combinations with words longer than 8 letters. On the other hand, don’t search for words shorter than three letters, since too many results will be found. As a rule, try to enter longer words first, then shorter words. This will result in a quicker search. 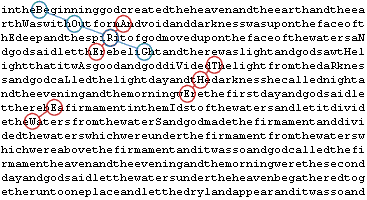 “We are the Borg” 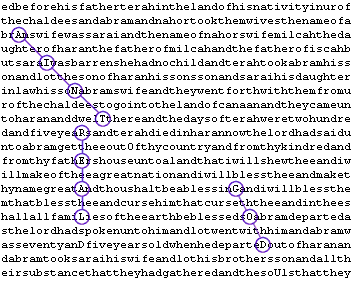 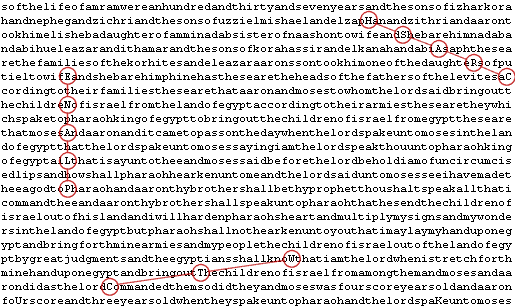 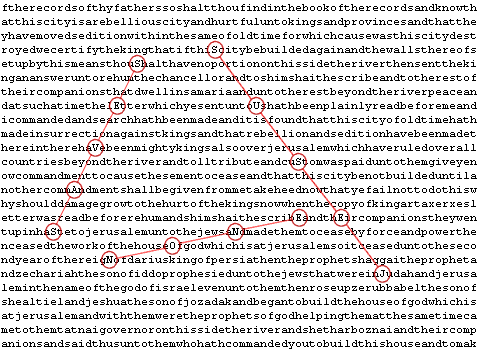 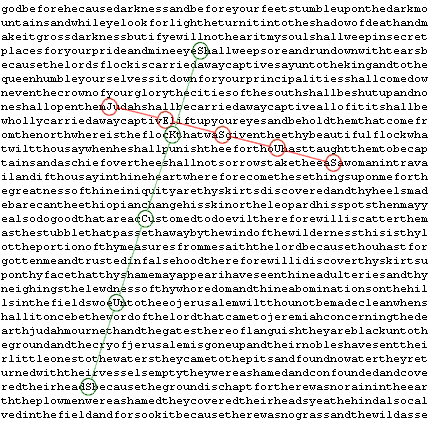 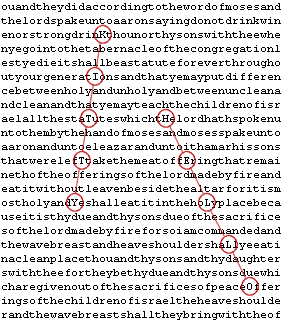 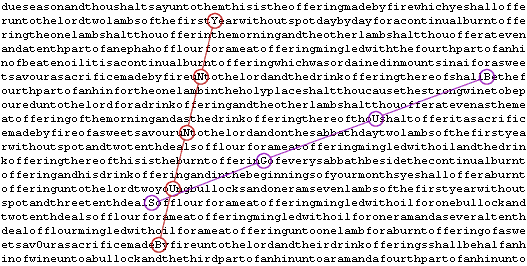 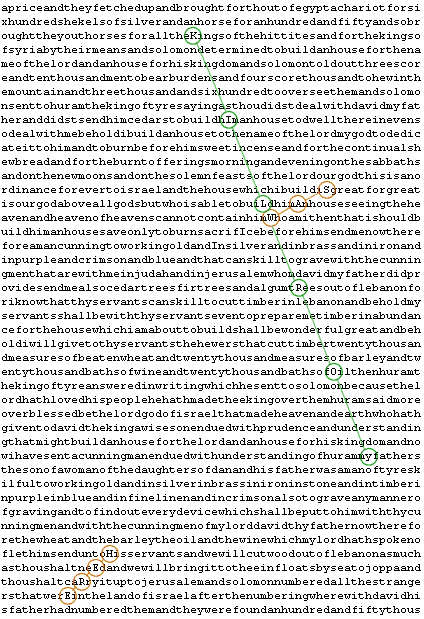 What Have We Learned?

Something, I hope. In fact, I ran the exact same program on a large Microsoft help file, and obtained quite similar results. I suppose that even the above “prophecies” cannot be valid because the King James Bible is only a translation of the original Hebrew and Greek. But we can safely hypothesize that, given a large enough source of text, no matter what language, any word or phrase can be found using similar methods.