I finally downloaded the Express edition of Microsoft Visual Basic .NET, and started a long-overdue peek into the much-hyped .NET technology. Up till now, most of my code has been plain C++ with straight Windows API calls. I generally stay away from languages that remove the programmer from the underlying architecture. But I must say that programming .NET has been nothing but a pleasure so far, despite the cons of .NET programming, of which there’s also no shortage.

I was actually pretty surprised that the Express editions of all .NET languages (VB, C++, C#, and J#) are freely downloadable and, for all intents and purposes, fully functional.

My first stab at programming VB.NET is a simple Mandelbrot Set viewer: 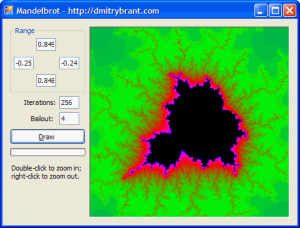 The total time to get this program written was about 25 minutes, which says a lot about the possibilities for tremendous productivity using .NET, although this application hardly scratches the surface of .NET functionality…