As the developer of a relatively popular app, there are numerous things I have to worry about on a regular basis. One of these things, however, is something for which I was kind of unprepared, and still not sure how to deal with: the emergence of knock-off apps – apps that have a suspicious and often hilarious resemblance to the original.

There were, of course, counterfeit apps that were blatantly using my trademark in their name (“DiskDigger” is a registered trademark in the U.S.), or my graphics in their store listings, in which case the Google Play Store thankfully took them down upon request.

But then there are apps that don’t quite use my trademark, and don’t quite have the same icon and screenshots. But because they are close enough, they can take advantage of being near the top search results for this category of apps, and lead numerous unsuspecting users to install them and be greeted with a barrage of ads and spyware.

Most of these apps seem to come from Indian and Middle-Eastern developers, which makes the horribly broken English in their app verbiage even more amusing to read. A small part of me even applauds their enterprising spirit, and I don’t fault them for wanting to make a buck, but I wish they’d find ways of doing it more honestly.

Take a look! Can you tell the knock-off apps from the real ones? 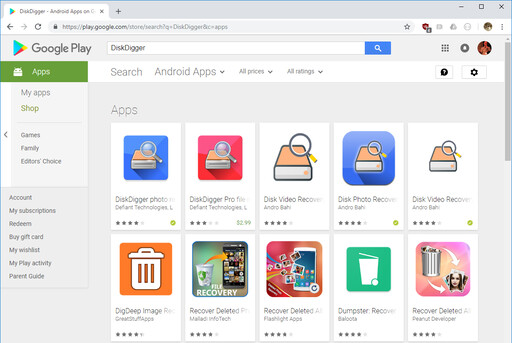 The problem is that because these apps don’t explicitly violate my trademark, Google refuses to take them down, which is unfortunate because these apps do literally nothing except shove ads in the user’s face, and therefore actively harm the ecosystem of the Play Store. Shouldn’t Google care more about preventing the Play Store from becoming a cesspool of bottom-feeding cash grabbers?