My house, like many older houses, is wired with standard telephone cables, which may have been useful until about fifteen years ago. The upstairs bedrooms, the kitchen, and the family room all have RJ11  (telephone) outlets that lead into the basement where all the cables merge together.

It occurred to me that I could replace these telephone jacks with something a bit more useful, namely Ethernet (RJ45) jacks! I say “a bit” more useful because there really isn’t much need for wired Ethernet connections in this day and age, especially within a single home, but I do have some personal justification for a wired connection:

For some  of the jacks, I was able to replace the cable by tying the end of the old cable to the head of the new one, and literally fishing it through to the basement by pulling on the other end.  However, a couple of the other cables seemed to be stapled to the studs along the way, so pulling them through  was not an option.

Fortunately, it’s still possible to simply transform these phone jacks into Ethernet jacks. A phone cable has four wires, and this is actually enough for an Ethernet connection. Even though an Ethernet cable has eight wires, only four are used in a 100Mb  connection. (For a gigabit  connection, all eight wires are indeed used, but a 100Mb connection is still sufficient for my purposes.)

So, with just a few bucks spent on RJ45 wall outlets, here’s how it turned out: 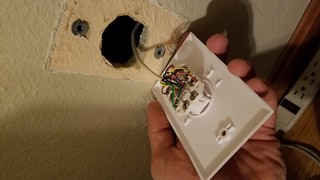 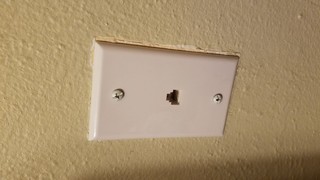 If you attempt to do this, make sure to get familiar with the pinout of Ethernet cables, as well as the pinout of the wall receptacle that you purchase.