For the last few weeks I’ve been geeking out on Google Glass, which I received after some time on the waiting list. I thought I’d share some firsthand observations and experiences with this marvelous little device. 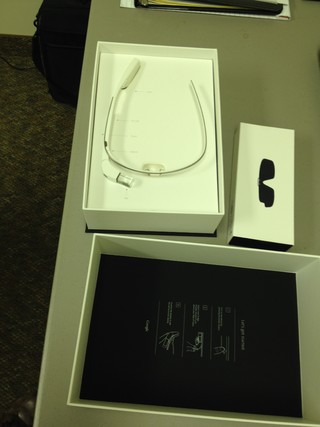 First, it looks like Google took a lot of lessons from Apple in the design of the product, but especially in the design of the packaging. The box is minimalist and monochrome with a matte finish, with only the logo printed on top in a humbly small font. There’s no plastic anywhere, and therefore no need for a utility knife and the strength of ten men to pry open the package. The inside of the box contains layers of perfectly-shaped cardboard that fit snugly around the curves of the device. It’s enough to make one salivate, an impulse on which Apple has been capitalizing for a while now. But enough about that.

The thing that impressed me the most (at first) was how well Glass fits around my head. I was worried that it would be slipping and wobbling as I move around, but that’s not at all the case. The fit is very comfortable and very stable. I was able to wear it for hours without any discomfort.

The positioning of the see-through display is also very well thought out. It obstructs only a small portion of the field of view, and after wearing it for a while, it becomes hardly noticeable.

I haven’t worn Glass to any restaurants or movie theaters (because I’m not a douche), but I have worn it while exercising, hiking, writing, reading, shopping, cleaning, and playing board games. In each of those instances, Glass contributed positively to the experience, as long as you discount being called a dork by everyone you encounter (although I’m pretty sure I evoke that response regardless of Glass).

The most useful feature to me, so far, has been the ability to read emails right before my eyes, as they come in. A close second is the ability to look things up on the web at any time, using my voice (and the voice recognition is quite good). Being a seasoned Android developer, I’m currently brainstorming possible “apps” that could be developed to enhance the experience even further (ideas are welcome).

So then, is Google Glass another ephemeral fad, or is it the future of wearable computers? There’s no doubt that, at the very least, it’s a powerful demonstration of the potential of today’s technology. Whether this particular implementation of the technology will be widely adopted remains to be seen, as Google still hasn’t set an official release date for the general public.

I think that Glass would be adopted much more readily if it didn’t have the front-facing camera, as useful as it is. Nearly everyone I spoke to while wearing Glass said something like, “You’re not recording this, are you?” There’s definitely some kind of psychological turn-off about having any kind of camera pointed at you. If only Glass came without a camera, and was simply a monitor device for the wearer, it might be much more palatable to the public, and less controversial in the media. But then, who says a little controversy is a bad thing?