This method makes it extremely easy to back up my entire photo collection by dragging the “Pictures” folder to a different drive. It also makes it easy to reference and review the photos in rough chronological order. This is why I’ve never understood the purpose of third-party “photo management” software, since most such software inevitably reorganizes the underlying directories in its own crazy way, or builds a proprietary index of photos that takes the user away from the actual directory structure. If you’re aware of the organization of your photos on your disk, then any additional management software becomes superfluous.

At any rate, there is one slight issue with this style of organizing photos: all of the various sources of photos (different cameras, scanners, cell phones, etc) give different file names to the photos! So, when all the photos are combined into a single directory, they often conflict with each other, or at the very least become a disjointed mess. For example, the file names can be in the form DSC_xxxx, IMG_xxxx, or something similar, which isn’t very meaningful. Photos taken will cell phones are a little better; they’re usually composed of the date and time the photo was taken, but the naming format is still not uniform across all cell phone manufacturers.

Thus, the optimal naming scheme for photos would be based on the date/time, but in a way that is common between all sources of photos. This would organize the photos in natural chronological order. The vast majority of cameras and cell phones encode the date and time into the EXIF block of each photo. If only there was a utility that would read each photo, and rename it based on the date/time stored within it. Well, now there is:

Download it now! (Or browse the source code on GitHub) 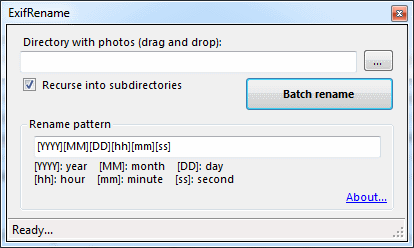 This is a very minimal utility that takes a folder full of photos and renames each one based on its date/time EXIF tag. As long as you set the time on your camera(s) correctly, this will ensure that all your photos will be named in a natural and uniform way.