This post is mostly tongue-in-cheek, but it’s something that I’ve been wanting to get off my chest for some time. The theory of evolution (or the fact of evolution, as Richard Dawkins refers to it) is still not as accepted as it should be, and remains “controversial” in some circles. According to a Pew Research Center study, as many as 34% of Americans do not believe that humans and other species evolved from earlier shared ancestors, and instead believe that humans have always existed in their current form, since the moment of creation.

Evolution is not a particularly difficult theory to grasp, but unfortunately its teaching is often encumbered by certain obstacles. The greatest such obstacle is religious dogma, which I don’t need to expand upon here. But there’s another obstacle that is nearly as harmful as religion towards a proper understanding of evolution:  popular media. There is a great number of movies, TV shows, and video games that have “evolution” as their central theme, but do a very poor job of representing the reality of evolution, and in fact perpetuate falsehoods about evolution that might take even more effort to unlearn.

Here’s a selected list of popular media where evolution plays a role, but is presented in a frustratingly incorrect way. These are, of course, my personal gripes. Yours may be different, and if they are, I’d like to know about them. Enjoy!

One the grossest misrepresentations of evolution occurs in the X-Men universe. Evolution is integral to the entire premise of the series: it is claimed that the X-Men have special abilities because of mutations in their genome.

The X-Men themselves believe that their mutations make them superior to ordinary humans. The ordinary humans, in turn, treat the mutants as outcasts and freaks because of, essentially, fear and jealousy.  The point to be drawn here is that no single mutation per se makes an individual superior to any other. The only metric of “superiority” in evolution is reproductive success.  If the X-Men series was about a mutant who could impregnate all the women in the world with a snap of his fingers, now that would be an advantageous mutation.

The sheer variety and randomness of “powers” possessed by the mutants begins to border on ridiculous. We have one mutant who can shoot energy out of his eyes, another who can control the weather, another whose skin turns into bulletproof metal, and another who can change the channel on the TV by blinking his eyes. Pray tell, what kind of mutation would enable a person to emit infrared light at the precise frequency and the right modulation to change the channel on a TV?

The powers of the X-Men are completely at odds with fundamental physical laws, including conservation of energy. But even if we dismiss the fact that there’s virtually no physical basis for any of the X-Men’s powers, there’s even less scientific basis for the idea that a genetic mutation is what causes them.

Alright, this is a bit of a stretch. But come on, Pokémon appeals to a substantial number of young children, and they, more than anyone, should be spared from misconceptions about evolution.

In the Pokémon world, a certain species of Pokémon can “evolve” into a different species by the mere act of gaining a sufficient amount of experience from battling other Pokémon. This perpetuates the falsehood that evolution is an instant “quantum leap” from one species to another, or that one species can instantly transform into a different, more advanced species.

Of course Pokémon are not real animals. Perhaps they are supposed to be “magical,” which might give them the ability to transform into different species. But whatever you call this transformation, don’t call it evolution.

As much as I like Star Trek, I’m afraid it’s one of the bigger offenders when it comes to properly depicting evolution, genetics, and DNA.

Firstly, in the Star Trek universe, it’s commonplace to see unions between two different species that produce offspring, for example a half-human half-Vulcan, or a half-Bajoran half-Cardassian, etc.  The thing is, if two individuals are able to produce a child together, then they are by definition the same species.  Just within the confines of the Earth, two individuals from different species cannot produce offspring, even if the species are very close in evolutionary time, e.g. humans and chimpanzees. So then, how could two species from different planets possibly be compatible?

Star Trek treats aliens from different planets as if they were different races of the same pseudo-species of “humanoids,” but this is very different from the idea of them being distinct species, with their own evolutionary lineage.

To its credit, Star Trek: The Next Generation attempts to explain the profusion of humanoid species on different planets in the episode The Chase, in which it’s discovered that life on habitable planets was inseminated billions of years ago by an “original” humanoid species that wanted to spread its likeness throughout the galaxy. This is a perfectly valid premise, but even if life was inseminated this way, the probability that the lineages on different planets would evolve into beings that look virtually identical billions of years later, and are able to interbreed, is essentially zero.

If you’re a Hollywood screen writer, or a video game designer, or a comic book author, or any other content creator, and are hoping to incorporate evolution into the premise of your production, consider presenting it as free as possible from misconceptions that might be absorbed by your audience. (Or hire me as a technical consultant!)

One would have thought that the FAT12 file system was safely a relic of the 1980s and 1990s, when it was used as the default file system for floppy disks and very early hard disks. FAT12 would be entirely impractical today, since it can only cover a maximum of 32 MB of disk space. However, I was surprised to find it very much alive today, in the most unlikely of places. 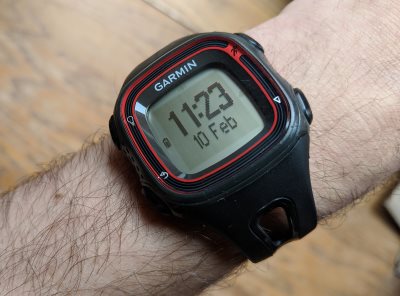 When I go running, I use my trusty Garmin Forerunner 10 watch, which uses GPS to record my position and pace during the run. When I connect the watch to the USB port on my PC, it appears as a mass storage device, and allows me to retrieve the workout files (stored in the FIT format). It hadn’t occurred to me until now to check out the finer details of this mass storage device, but there were a few things that surprised me:

Therefore, hats off to Garmin for not overcomplicating things, and making use of a tried and tested solution that is sure to remain compatible and future-proof.