During my last visit to Russia a few years ago, I rummaged through my late grandmother’s old apartment and kept a few items, which included several magnetic reel tapes which I presumed my grandparents used for bootlegging and copying their favorite music from the sixties and seventies. 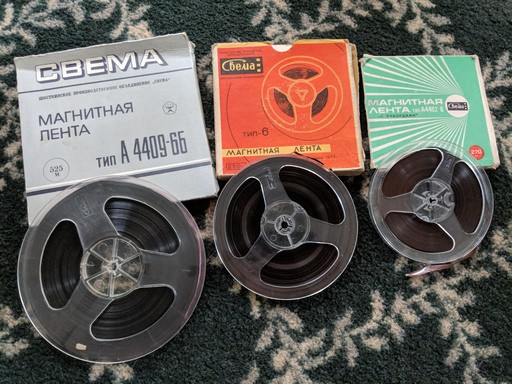 I’ve been wanting to listen to the contents of the tapes for a while now, but only recently have I found a bit of free time to actually do it. It’s still very much possible to buy a reel-to-reel player on eBay for less than $100, but I wanted to see if I could make use of existing components that I already have. And besides, I’m only looking for a rough rendering of the recordings, and don’t really need the precise original fidelity that an actual reel-to-reel player would provide.

I still have a relatively new cassette player that I’ve used previously to digitize some of my own cassettes from years ago, and I had a hunch that the “format” of the analog audio on the magnetic reels might be similar, if not the same, as the cassettes, meaning that I could theoretically use the cassette player to read the reel tapes!

The first step is to tear down the cassette player. As a side note, although this cassette player is quite cheap, it’s actually very useful because it has a USB port that powers it and simultaneously makes it become a generic USB audio input device, which makes it perfect for digitizing cassettes. Therefore, I wanted to tear it down in a way that would make it continue to be able to read cassettes, if that use case ever comes up again.

Anyway, I removed the front casing of the player, and tore away the plastic guides that kept the cassette tape in alignment, since these guides would interfere with the thicker reel tape. I then affixed the player onto a wooden board, and added two thick screws that will hold the reels. I also attached a thick metal post on either side of the player, which will act as tape guides and keep the tape horizontal across the player. 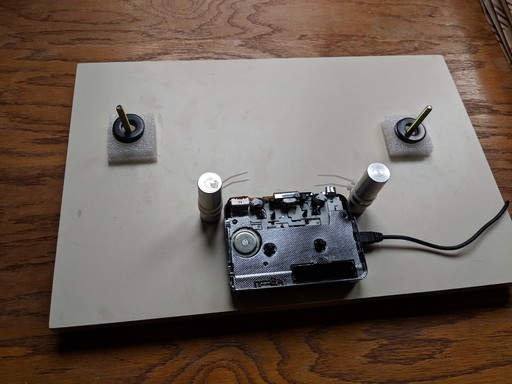 Also notice that I put some wire ties onto the metal posts, to serve as vertically-adjustable tape guides for experimenting with the precise alignment of the tape with the read head. 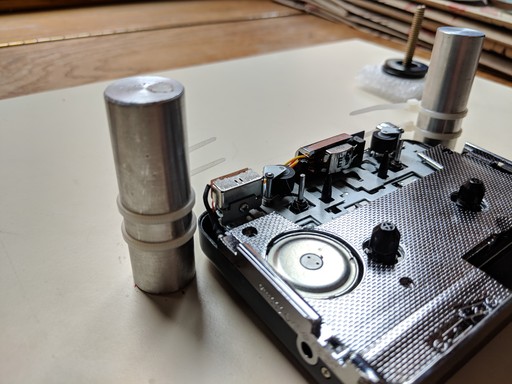 Another minor problem is that I didn’t have an empty reel onto which I would wind the current reel that I’m reading. For this purpose, I cut a circle out of some thick cardboard, and glued old CDs on either side of it. This would serve as my empty reel: 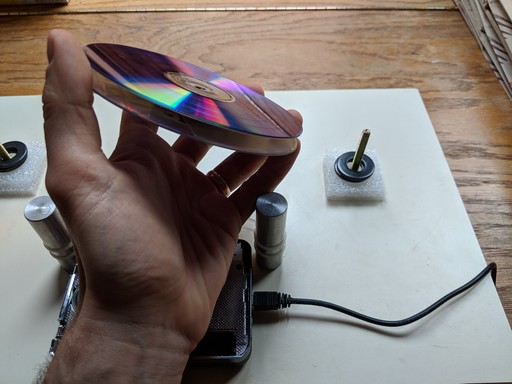 And finally the whole contraption is ready to go! There’s something poetic about using CDs to construct a reel onto which ancient magnetic tape will be wound… 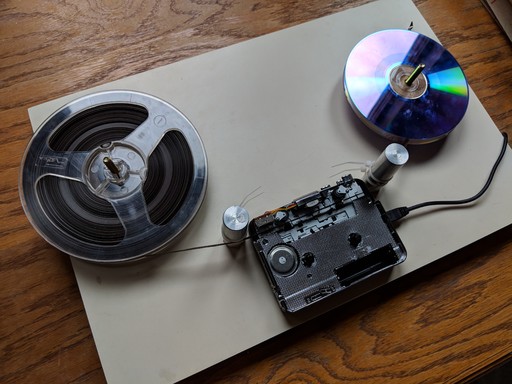 I proceeded to connect the cassette player to my PC, and fire up Audacity, the trusty audio recording and processing software. I pressed “Record” in Audacity, pressed the “Play” button on the cassette player, and… to my amazement, the audio started to come through! At first I was only getting one of the two stereo channels, which meant that the tape wasn’t well-aligned with the head, but after a bit of adjusting of my wire-tie tape guides, I got a good stereo signal: 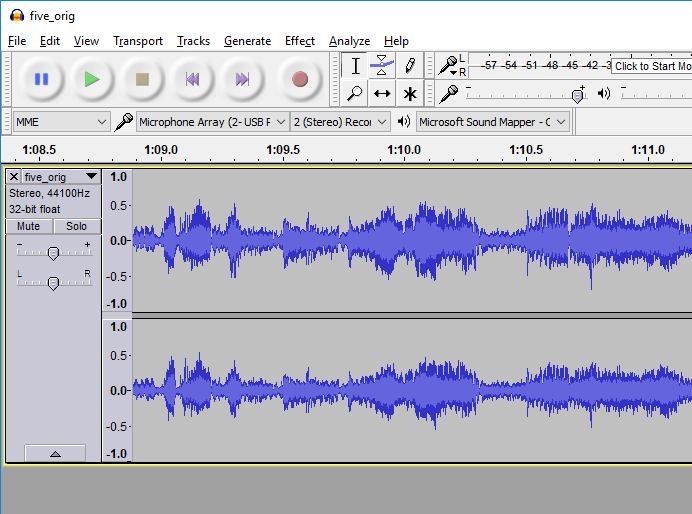 It turns out that the reel tapes are recorded at double the speed of cassette tapes, which means that the audio extracted by the cassette player sounds slowed-down by a factor of two. So, the final step was to use Audacity to boost the speed of the recording by 2x, and the final audio came out! The only slight issue is that the audio seemed to be lacking the higher-ish frequencies, so everything sounds a bit muffled. It’s difficult to tell whether this is because the cassette player head isn’t fully compatible with the reel tape, or because the tape itself has worn out or degraded over time. But again, I’m not looking for a perfect transfer of the audio, just a first-order approximation, so this is no big deal.

What’s on the tapes?!

The actual contents of the tapes are not particularly surprising, but still gave me a wonderful tiny new glimpse into the lives of my grandparents through their musical tastes. One of the tapes contains music from The Irony of Fate (Ирония Судьбы), one of the most beloved films in the Soviet Union, and still watched today by a huge number of Russian people on New Year’s eve. I can attest that the film’s soundtrack, performed by Sergey Nikitin (Никитин) and Alla Pugacheva (Пугачева) is worth saving on tape and listening on any occasion.

The second tape seems to contain random songs from radio broadcasts, including a few songs from the West. These include Seasons in the Sun by Terry Jacks and Mexico by the Les Humphries Singers. Presumably these songs were deemed innocuous enough by the Communist censors, who otherwise banned music that was seen as subversive, sexualized, or violent, such as Pink Floyd, Black Sabbath, and The Village People (that’s right).

And the third tape contains some songs by Vladimir Vysotsky (Высоцкий), another iconic figure in Soviet music, known for his biting use of slang and street jargon (known as blatnaya pesnya or the newly-coined Russian chanson) to deliver poignant, striking, thought-provoking, and often hilarious political messages. The same tape also contains songs by Konstantin Belyaev (Беляев), unknown to me until today, but apparently another minor figure in the same genre of blatnaya pesnya as Vysotsky. To be honest, I found Belyaev’s lyrics rather juvenile (more so than other блатняк), and probably better suited for drinking songs rather than music for thoughtful enjoyment. But then, perhaps that’s exactly what my grandparents used them for.

Well now, with a fresh insight into another facet of my grandparents’ lives, and a renewed appreciation for Soviet musical traditions, I think it’s time to give these tapes one more listen!

* If you’re very curious, here is a sample of the audio from one of the tapes.