Alternate Data Stream Manager (ADS Manager) is a simple, straightforward, and most importantly free utility for accessing and modifying so-called “alternate data streams” within any given file or folder (these are known as a “fork” in more general filesystem terminology). This functionality is a little-known feature of the NTFS file system that allows one file or folder to contain more than one stream of data. This allows your files to contain “hidden” data that will be invisible to other applications.

What are its uses? 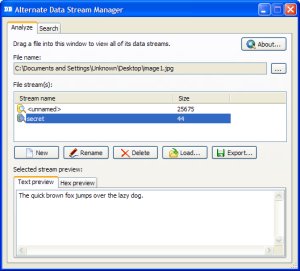 If you’re familiar with the concept of NTFS alternate data streams, then the controls in ADS Manager should be intuitive enough to use. Just in case, however, here are some step-by-step instructions for several basic procedures:

The functionality of Alternate Data Streams works only with NTFS file systems. If you add alternate streams to a file, and then copy the file to a partition that is not NTFS, the alternate streams will be lost.

This app makes use of a little-known feature of Windows path notation: if you add a colon after the name of any file, and then add a name after the colon, it will directly access (or create) an alternate stream with that name.   For example, C:\foo\bar.txt:test will access an alternate stream called “test” associated with the file bar.txt.

Therefore we can pass this kind of specially crafted path into the CreateFile function, which will give us a handle to the alternate stream for reading, modifying, or deleting. And to open a handle to a folder, we simply provide the  FILE_FLAG_BACKUP_SEMANTICS flag.

However, in order to query all the alternate streams associated with a file, we must use the Windows Backup API, where the BackupSeek and  BackupRead functions allow us to traverse the list of the streams for a particular handle (whether it is a file or folder).

Have you found it useful?

…or at least interesting? Then send me a comment or a suggestion!

After rediscovering the source code for this app, as well as the IDE that was used for building it (Borland Developer Studio 2010), I added a feature that was requested by some users, namely the ability to open folders in addition to regular files, and manage their alternate data streams.