I went down a deep rabbit hole on the history of Amiga computers, and specifically the types of image encodings used in old Amiga software. As an enthusiast of digital preservation, I want to make sure that any images saved using that software can still be decoded and converted using modern-day tools.

What I found is a rich history of software developers squeezing every last bit of performance out of underpowered hardware and limited storage, using techniques that blur the line between laughably hacky and downright ingenious.

A good example is the so-called Extended HAM (HAM-E) graphics mode, which is basically designed to enable a higher color depth, i.e. more color bit planes, at the expense of horizontal resolution. However, the native format of Amiga bitmap images didn’t support this kind of color encoding in the metadata of the bitmap file, so how do we encode our color palette? The solution: put the palette information literally into the actual image!

That’s right, the color palette actually appears as several lines of seemingly “garbage” pixels at the top of the image, and a proper decoder needs to be aware of this hack. Below is an example image that is decoded incorrectly, i.e. using a decoder that reads the image literally, without taking the extra color information into account:

Notice in the above image that we can vaguely discern a stretched shape of a person’s face, and we can also discern a few lines of pixels at the top that don’t seem to go along with the rest of the image. Now here’s the same image decoded correctly, with the color palette lines consumed and blanked out: 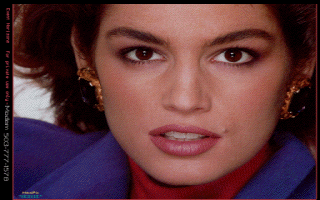 But doesn’t that sound wrong? Even if a proper decoder recognizes and blanks out the garbage lines, won’t the bitmap always have unused lines at the top? Not to worry — those lines will fall into the overscan region of the monitor! (You know, because a CRT monitor has overscan margins.) Therefore the palette lines will be automatically hidden from view, unless the user explicitly adjusts the overscan on their monitor. Ah, the good old days.

There are a few modern software packages that handle these types of images and a plethora of others, including abydos, recoil, and grafx2, so the preservation of old Amiga image formats is in good shape. And in my own ImageFormats library for .NET, I implemented support for some even more obscure Amiga formats, notably ACBM (Amiga Contiguous BitMap), which seems to be unsupported by other decoders.