A rare peek into the genius that is Gene Ray 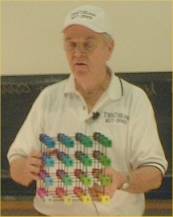 More and more people every day are becoming acquainted with the Time Cube principle, conceived by one Gene Ray, philanthropist and champion Marbles player. If you’ve had a chance to look over the TimeCube web page, you must understand the necessity to comment upon this fundamental new principle of nature.

After reading the full text of the web page (and after a massive migraine from the 10000-point font), it seems to me that one of three possible conclusions can be drawn about Gene Ray and the theory of the Time Cube:

In a nutshell, Gene Ray presents a theory that everything in nature revolves in a 4-stage (4-corner) metamorphosis. This includes human beings, which supposedly go through the “corners” of baby, child, parent, and grandparent. This also includes the planet Earth which, according to Ray, experiences four days’ worth of rotations within a single day. Ray also applies the theory to the human face, saying that your face is only one corner of your head; therefore, you believe that you are only one fourth the person you really are.

And of course, as is standard in any crackpot worldview, Gene Ray insists that the academic establishment is conspiring to prevent his theory from being given consideration. He fearlessly calls educators assholes and stupid and evil, and urges young students not to listen to their shithead professors and debate the Time Cube freely. Ray couples this with the idea that human language is “counterfeit,” and that all words we speak are evil and damaging. An additional outgrowth of Ray’s hate against words is his disdain towards God (presumably the Christian one), since all religions are, in one way or another, based on words.

Moreover, Gene Ray believes himself to be the “wisest human” who has ever lived, and, on occasion, has called himself Dr. Gene Ray (despite his hatred of academia), all because he is the first to discover this principle of the Time Cube.

My curiosity about the Time Cube can best be expressed in the form of questions and comments which I will address towards each major portion of the theory.

Believe it or not, I have exchanged a few e-mails with Gene Ray. I must admit, he was quite prompt in responding to me. But was he coherent? Well, judge for yourself. The following is an actual response from Gene after I sent him an e-mail asking him to go into a little more detail about Time Cube:

The Time Cube demonstrates that creation is actually Cubic, not 1-corner singularity as taught by academia and religion.. Think of a 4-corner classroom as representing the 4-corners of Earth, wherein stupid educators teach only 1-corner knowledge.

There are 4 simultaneous 24 hour days in a single rotation of Earth. There are 4 simultaneous years in a single rotation of Earth around the Sun. Each season has its own separate year. Your 4 corner head has only a 1-corner face – proving you to be only 1/4 or 1-corner of the entity you believe you are. Humans rotate around 4-corner stages of human metamorphosis as in baby, child, parent and grandparent. There should be a video tape and book available after the MIT lecture and debate. Your problem with comprehending the Time Cube may be due to your academic brainwashing and indoctrination. Time will tell. 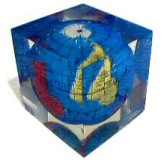 Gene Ray has drummed up somewhat of a following over the years, with pro- and anti-Cubic websites popping up now and then; more proof that people will believe just about anything. I suppose the reason I felt compelled to comment on Time Cube is due to the utter absurdity of Ray’s statements and the vastness of his delusion.

Ray was invited to lecture at MIT in 2002 and, more recently, at Georgia Tech. While I do appreciate the humor value in letting him lecture at any university, I feel somewhat sorry for Gene Ray himself, who believes that his audience actually buys into (if not understands) what he’s talking about.